What is Bus Rapid Transit? 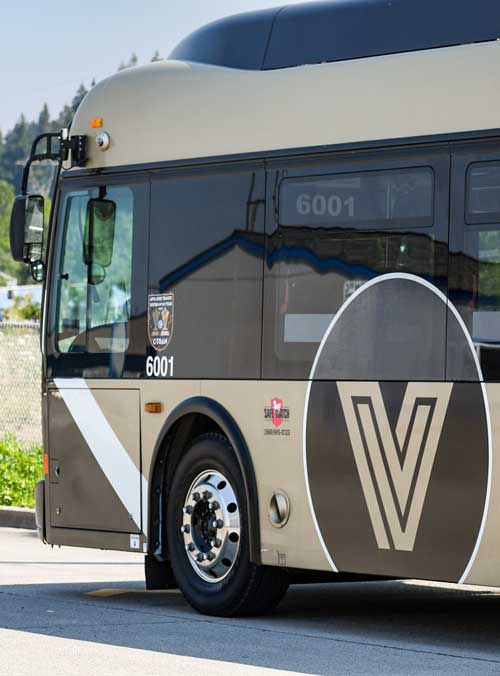 What is Bus Rapid Transit?

Bus rapid transit, or BRT, uses various ingredients to create a more efficient and reliable transit service. Those can include larger buses, separate bus lanes at major intersections to bypass traffic congestion, specialized signals that give buses priority, station improvements, more attractive passenger facilities, or other features. Not every BRT system looks the same. Different projects can use different elements depending on the needs or character of the community it serves. What makes sense for one corridor might not make sense for another.

In 2017, C-TRAN launched the region’s first BRT system, The Vine, on Vancouver’s Fourth Plain corridor. The Vine uses 60-foot articulated buses, improved stations, traffic signal priority, level boarding platforms, and other features to move passengers more efficiently and reliably on C-TRAN’s busiest corridor. The Vine had an immediate impact: Within the first year of operation, transit ridership on the Fourth Plain corridor jumped by 45 percent. Late departures dropped by 89 percent. Scheduled travel times decreased by 12 percent. And a host of new housing and other development injected millions of dollars in private investment into the corridor. Many projects cited The Vine as a critical reason for its development.

BRT borrows some of the features of light rail but has the added flexibility of running on streets without needing a dedicated, fixed guideway. BRT buses are often longer and articulated with two or three doors on one or both sides, depending on the system. The buses are also built with low-floor entry to accommodate quick loading and unloading of passengers – including those using wheelchairs or bikes. BRT stations are designed to enhance safety and security for riders and are typically open and well-lit. Each BRT station is recognizable by its unique design and carries the BRT system brand or identity. Some BRT buses are diesel-electric hybrids – including those on The Vine – and can reduce carbon emissions compared to regular diesel buses.
BRT can accommodate more riders by using larger vehicles and with greater frequency. The Vine operates on a 10-minute frequency during peak times. It has benefited from special queue jump signals at two locations on the Fourth Plain corridor to reduce travel times – even while moving more passengers.

Rather than paying as you board the bus, customers can pay BRT fares in advance at the platform. Passengers can use ticket vending machines to pay their fares before the bus arrives, then board the vehicle through multiple doors. On The Vine, passengers can tap their Hop cards at either door as they board. Many BRT systems can complete their stops in 15 seconds or less. A standard bus loading several passengers, each paying a fare as they board, can take several minutes.

Where else is BRT operating?

In addition to The Vine, other BRT systems are operating in numerous cities around the U.S. and the world. In the Northwest, King County Metro’s RapidRide serves the Seattle area. Community Transit in Snohomish County operates two lines of its Swift BRT system. In Oregon, Lane Transit District’s BRT network, known as EmX, serves the Eugene-Springfield area.

C-TRAN is currently building its second BRT line, which will operate along Vancouver’s Mill Plain corridor between downtown Vancouver and the Columbia Tech Center in east Vancouver. The project is now under construction, with service expected to begin in 2023.